According to Xinhua News Agency's Xinhua Viewpoint Weibo news, the construction of a traffic control network initiated by 15 Chinese academicians and experts, more than 10 companies and more than 10 universities participating in independent research and development is accelerating. Chen Qingquan, the project sponsor and academician of the Chinese Academy of Engineering, said in Beijing this week that the entire project market will reach a trillion yuan, and it is expected to see results within five years.

In recent years, with the advancement of China's urbanization process and the rapid growth of the number of motor vehicles, the amount of urban road traffic has been increasing, and various traffic problems have become prominent, such as traffic congestion, traffic accidents and exhaust pollution, and these traffic problems have also been given to the economy. Development has caused huge losses. On the other hand, in recent years, residents' demand for transportation presents diversified and multi-level characteristics, which puts higher requirements on the safety, convenience, comfort and timeliness of transportation. The construction of comprehensive transportation system in China is imminent. . The development of intelligent transportation systems is the general trend.

Analysts pointed out that benefiting from the release and implementation of relevant incentive policies, the domestic intelligent transportation industry has achieved rapid development, with an average compound annual growth rate of more than 20%. Relevant research shows that with the advancement of new urbanization construction and the implementation of relevant policies for smart cities, the future development of the intelligent transportation industry is broad, and the industry development will usher in a sustained and stable growth period. 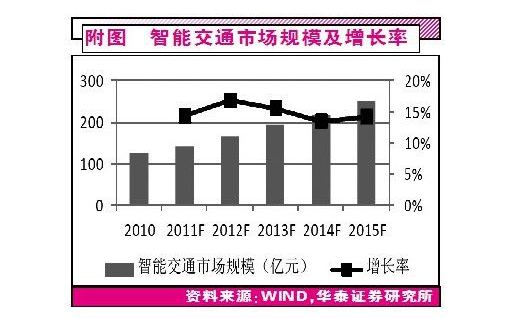 Recently, the company has signed a â€œSmart Healthâ€ project framework agreement with the Nan'an District Government of Chongqing as the general contractor, with a total amount of 500 million yuan and a construction period of five years. The agreement will include telemedicine, regional medical care, appointment registration, and resident health records, and the scope of the project will be significantly higher than the existing other smart medical related projects. The company will also make partial investments and participate in project operations. Compared with other government projects under the smart city, the medical field is closely related to people's livelihood, the government's investment power is large, and the income and profitability are relatively certain. Analysts believe that the company's determination to invest in smart healthcare is firm, and there will be more such projects in the future. The signing of this agreement will hopefully open up a new profit space for the company and lay a good foundation for the follow-up project.

The company has accumulated a lot in the traditional business intelligent transportation field. In the second half of last year, it acquired the rail transit intelligent service provider Asia-Pacific Anxun, and successfully cut into the rail transit field, and initially completed the intelligent layout of â€œbig trafficâ€. At the same time, Asia-Pacific Anxun is rich in resources in Beijing, and the company is expected to use this as a base to expand its existing business to North China. According to the announcement of the company on March 25, the transfer procedures of Asia-Pacific Anxun have been completed, and it is expected to be consolidated before April this year.

1. Its leading position in the field of large-scale traffic intelligence;

2. The qualifications are complete, and the ability to undertake smart city general contracting projects is strong;

3. The company has always demonstrated a relatively stable strategy for cash flow and profitability in project selection.

Yi Hualu: highlighting the wisdom of the king of the city

As a carrier of the country's emerging industries, unlike the traditional high-energy-consumption and high-pollution methods that drive GDP, smart cities have become the important growth point of China's economic future with the theme of â€œgreenâ€. After undergoing pilot projects in some cities in 2013, wisdom The city will enter the â€œGreat Leap Forwardâ€ construction period in the next few years, and the trillion investment needs to be implemented. As for the most worrying financial problems in the market, various modes such as bank loans, capital market financing, and government project income generation can be digested.