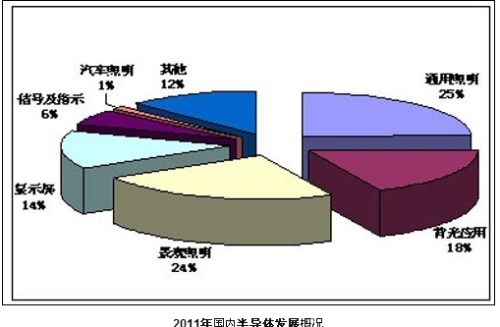 In 2011, the development of domestic semiconductor industry industry investment gradually rational capital to change the power of the industrial pattern is gradually driven by the investment policies of local governments in previous years, the number of epitaxial equipment in the upstream of the rapid increase in 2011, but limited by the technology, talent and market demand, production capacity Play is not ideal, and product performance has not achieved a substantial breakthrough. Technology and talent are still the biggest obstacles to the upstream epitaxial chip lighting project. In the case of poor overall industry conditions, the blindness and repetitive investment momentum in various regions have been curbed, and rational consideration of industrial development has made industrial investment more cautious. For example, in the first half of the year, as the sapphire substrate project started to fall, the production release price rapidly fell to 10 US dollars in the second half of the year, and companies stopped building or abandoned their investment, and began to rationally think about the direction of investment.

The influence of capital on the development of the industry has gradually deepened. Industry competition is not only a competition of technology, products and markets, capital will change the industrial structure to a great extent. Expanding financing channels through public offerings and transactions in the securities market, and occupying an active position in the increasingly fierce competition in the industry, has become the pursuit of many companies for further development.

The turbulent international industrial environment and intensified competition in the industry have increased the pressure on corporate investment and profitability. Domestic semiconductor lighting has begun to accelerate its differentiation and industrial integration has begun to emerge. Enterprises with capital, scale, technology, brand, and market channels have become the main players in industrial integration, and the distribution pattern of domestic semiconductor lighting companies is gradually improving.

Fully Deploying the Industrial Innovation Environment by the Government Further improving the year 2011 is the first year of China's â€œ12th Five-Year Planâ€ period and is also the year when the Chinese government has fully deployed the semiconductor lighting industry. The Ministry of Science and Technology further strengthened the support for semiconductor lighting technology innovation, and approved the second batch of pilot cities for pilot cities of â€œTen Cities, Ten Thousand Citiesâ€, and will further develop qualified supplier catalogs and recommended product catalogs. The National Development and Reform Commission clearly proposed the establishment of a leader system, and jointly issued the "Announcement on Gradually Prohibiting the Import and Sale of Incandescent Lighting Incandescent Lamps" by the Ministry of Commerce and the AQSIQ. The Ministry of Financeâ€™s policy on subsidy for semiconductor lighting products is also coming soon.

At present, technology, patents, and standards are still the main constraints for the development of China's semiconductor lighting industry, especially in 2011, when the development of the industry enters the adjustment stage. In 2011, China made new explorations in the technological innovation model and the construction of public R&D platforms. It relied on the Semiconductor Lighting Alliance, initiated by five domestic and foreign research institutes, and participated in the establishment of the National Key Laboratory of Semiconductor Lighting Joint Innovation by 22 companies. Successfully started, through focusing on industrial common key technologies and leading-edge technology research, following the principle of joint, open, and sustainable, building an open, international semiconductor lighting public technology research and development platform with first-rate equipment, first-rate mechanism, and first-rate talents. In order to become China's semiconductor lighting industry to seize the commanding heights of industrial development strong support. The National Standards Committee has established the leading group and expert group for semiconductor lighting standards jointly with the National Development and Reform Commission, the Ministry of Science and Technology, the Ministry of Industry and Information Technology, the Ministry of Finance, and the Ministry of Housing and Urban-Rural Development to make overall planning, overall coordination, and comprehensively promote the development of the standards system. The industrial development environment has been further improved.

It is expected that in 2012, with the launch of the â€œTwelfth Five-Year Planâ€ work, the introduction of relevant supporting policies, the promotion of the scale of lighting applications, and the stability of the international economy, the development of the semiconductor lighting industry in China will improve in the second half of the year. SMEs' operating and financial pressures will not be significantly reduced, and leading companies in all sectors of the industry will have the opportunity to use their scale, technology, capital, market and brand advantages to expand their leading position through industry consolidation. Domestic semiconductor lighting industry A dominant brand system will also gradually form and the overall industry landscape will change accordingly. In 2012, China's semiconductor-based lighting industry will not significantly change the pattern of the industry, but the introduction of relevant domestic policies will further enhance the importance of the domestic market. The actual performance of semiconductor lighting listed companies will greatly affect the direction and scale of industrial investment, and the speed of industrial integration will further accelerate. Leading international companies will also gradually realize the domestic industrial layout, which will also make the domestic industry competition more complex.

For domestic semiconductor lighting companies, shaping their core competencies and brand image to form a clear product and technology line will be the most critical issue in the industry competition in 2012 and beyond.

We provide quick-turn injection molding by many types of materials, like ABS,  PA66, PBT, TPU, TPE, PVC, PE, NYLON 6,  PC, silicone, TPE, EPDM, PUR, etc.  Special for some plastic parts. Our advantages in internal prototyping, bridge tooling and short-run manufacturing, which can eliminate the costly and time-consuming for customers a lot.

After customer approved 3D drawing, we can test it by 3D printer first, then move on for formal tooling once confirmed ok. And all  related materials, logo, color or finishes can be chosed as customers' requirement.